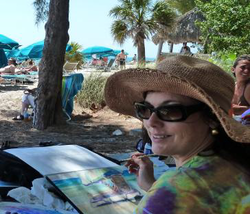 As early as I can remember, I have had an appreciation of, and attraction to, all things dealing with the visual arts. Perhaps this stems from growing up at the knee of an artistic mother, or a distant ancestor of my father’s who painted frescoes in the cathedrals of Belgium. After exploring many different mediums over the years, I have come to concentrate my efforts on transparent watercolor. My style is loose and somewhat impressionistic, and my subject matter of choice can range from Florida vernacular architecture to flowers, seascapes or animals. My work is always a study in the contrast of values and hues of the color wheel.

My professional career began with a degree in Advertising and Marketing from the University of Florida, and from there, I spent the next 23 years in the Advertising Agency and Public Relations business. I also hold a Certificate in Surface Design from the Fiber Arts Institute in Palm Harbor, Florida and have studied painting with many current day masters, including Mel Stabin, Janet Rogers, Pat Weaver and Fred Graff.

I currently work full-time as a professional watercolor and watermedia collage artist. Art has always been a part of my life, and I was fortunate enough to have an artistic mother who nurtured my development. My early professional career as a creative director/owner of an advertising agency fueled my desire to return to art full-time. In 2002, that dream became reality.  Since then, I have studied with many nationally-known instructors, and am privileged now to pass that knowledge on to my own students, through the Mount Dora Center for the Arts, and the Leesburg Arts Center. I was a founding member of Artisans on fifth, Mount Dora’s very successful artists’ cooperative gallery, and enjoy the synergy of a cooperative working studio space within the Baker Street Artists’ Studios, also in Mount Dora.

My mantra is “Art Can Change the World.” I believe that creating art can raise self-esteem, inspire creativity in other areas of our lives, heal wounds, overcome obstacles and give us the hope of a better future. I feel it is our job as artists to share those gifts that we have been blessed with, so that we can inspire change in others. For that reason, I am a frequent art contributor to local charitable fundraisers, and am working to establish a free weekly art/mentoring program for under-privileged children in my community.


Awards and Other Honors: