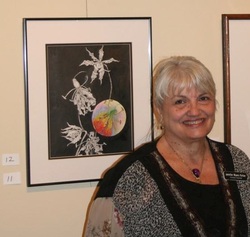 Jennifer Myers Kirton has been a practicing artist for nearly 40 years. Having moved to Florida in 1950, she learned to love the surroundings and the beauty that was her state. She won her first national award at 12 years old but went on to become a nurse and homemaker. She returned to her art while a young mother and entered her first professional art show, winning five blue ribbons. She was mentored by several nationally recognized artists including Charles Turzak and Joy Postle both of whom lived in Florida.

She works from nature and from her imagination preferring a hands-on approach to her art. Her art reflects her surroundings, capturing a moment in time and frequently depicts a floral, botanical or surrealistic genre. All drawings are one of a kind are original and incorporate placing her visions in an illusion on paper. Her renderings are usually done in ink on rag paper with an occasional spotlight of color using colored pencils. Her works are distinctive in their bold experimental use of stippling and other rendering techniques.

Her art has been shown locally, nationally and internationally, winning multiple awards and recognition. She currently is in Marquis Who’s Who in American Art, Who’s Who in World, Who’s Who in America, Continental Who’s Who, Remington Registry, and other publications. She has been featured in articles in Orlando/Lake Sentinel, Lake Magazine, National League of American Pen Women spring fall 2009, Indy Arts DVD magazine, The Suit Online-E-zine, and others. Her art work has been juried into Florida Artists, Best of Florida Artists and Artisan 2006, Best of American Artists and Artisan –mixed media, American Art Collector National (6 times), the best of Upstream People Gallery international online competition. She was called “a master of Pen and Ink” by Larry Bradshaw, Upstream People Gallery and art professor. She was selected to be spotlighted as featured artist on Art-exchange.com of Arkansas, Gallery Direct of Canada, Florida Committee of the National Museum of Women in the Arts for the inaugural state website, the state Art website.