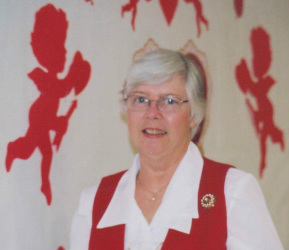 Born and raised in the Canal Zone in Panama, my artistic career began at an early age. Drawing in the margins of my school books much to the chagrin of my teachers began in the fourth grade. When in the fifth and sixth grades, my parents arranged to have me take oil painting lesson.  I later learned that my teacher was a member of the NLAPW.

I continued my passion for painting when my job didn't interfere.  in 1984 and 1985, I was privileged to travel with two missionary ladies down to the jungles in the southern part of Panama close to the Colombian border. On those two trips I took my camera and recorded the way of life of the Choco or Embena Indians.  With 10 rolls of film in my camera case , I was eager and hopeful that something would turn out.  With the array of slides, I decided to have the best made into pictures.  I began to to pen and ink sketches from these pictures.  When the project was completed, a friend of mine who was a member of the NLAPW Panama Canal Branch insisted that I do a show of my work.  The local Art Gallery was not available at the time, so my friend stripped the walls of her apartment of her artwork, hung my work and invited the entire community.   An hour before the show began, three of my pieces were seen by my dentist and he wanted then right then and there ... not wanting them to be seen by the public! So I sold my first three sketches before the door was opened for the gathering of art lovers.  I was stunned that I had sold any of my work and one piece in particular was my favorite. I didn't want to sell it, but this person kept after me to part with it and not thinking I said "$50.00" and she promptly wrote out a check and handed it to me!  I could only think that she had been down to that part of the jungle and she knew of that particular hut!

That was the start of my journey into the League and from there history was made as far as my artistic career.  I have always done oil painting, bud oddly enough every time while living in Panama, I'd work on a painting. I had to move due to the political situation. I almost became paranoid wen I'd pick up a brush!  One time I even got three pieces done before the notice came to move!

Now that I have been retired for 12 years (Jan 1, 1993), I haven't had the time nor a decent area to do my work until recently, I have all my paints and easel handy in an overnight bad with plenty of canvas ready to drag along when I go dog sit for one particular family where there is quite solitude, with great morning light... perfect for my favorite past time.

With all the goings on with family activity, getting a show together is almost next to impossible.  Quiet time, much less any time to frame or get frames for the work I've done is a challenge.

I continue to enjoy the friendship and fellowship of my branch, the rich experience of each gathering of our meetings and the input of all members who are able to attend.