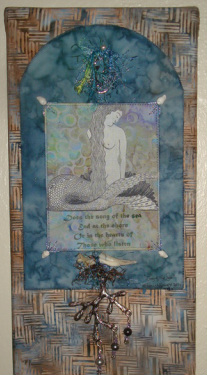 Fiber Artist, Heather Glennon-Hopcraft, has been a artist  since childhood and a quilter since 1986. Her English grandmother taught her knitting, crocheting, and sewing at age 6, passing on a love of creating with thread and yarn.  Heather is the daughter of a chemistry professor at Wesleyan Unversity.  Through the university and travel, she was exposed to creative and innovative art.  As a teenager, she continued to expand her artistic knowlege as an apprentice at Wesleyan Potters learning pottery, weaving, batik and silk-screening. After studying art, anthropology and computer science in college, Heather moved first to Arizona then to California to pursue a career in graphic arts. During the 1990's, Heather won three Addy Awards for her graphic design of marketing materials and point of sale displays.  It was in CA that she began to pursue quiltmaking and found a creative and encouraging environment. In 1994 Heather was involved in a near-fatal car accident and suffered a severe brain injury.  It was fiber art  and quilting  that helped her recover.

Heather's first art quilt and original design, "Falling Pins" won Viewer's Choice Award at Lake County Quilt Guild Show in 2008  "Falling Pins"  was then  juried into National Quilting Association Show(Columbus, OH) and Quilt Odyssey(Hershey, PA). It was also a semi-finalist in American Quilters Association Show(Nashville, TN) in August 2008. Heather's work including all  of her fine art quilts and fiber journals were  featured in the Mount Dora Center for the Arts "Fiber Invitational"..   In 2009 "All Pinned in and Stressed Out & Letting Go" art quilt won Viewer's Choice and Honorable Mention at Lake County Quilt Guild Show.  Both "Falling Pins" and "All Pinned In, Stressed Out & Letting Go" were juried into the 2009 Road to CA Quilt Contest and World Quilt Show Florida in the Art/ Innovative category. In January 2009,  "Falling Pins" was featured in American Quilter's Magazine in an article on color from a Judge's perspective and was an example of good use of color. In 2012, "Sunshine + Flowers = JOY" won 2nd place in the art category at Lake County Quilters Guild Show.  This year(2013), "Breaking Free" won Best Home Machine Quilting at Lake County Quilt Guild show.

Heather's fine art quilts,such as "Falling Pins," "All Pinned In, Stressed Out & Letting Go", "Pins In Flight", "Breaking Free" , and "Scissorfall" concentrate on creating the feeling and sense of movement in fabric through the use of gradated colors, a repetitive image(safety pins/scissors) and surface texture.  In current work such as  "Sunshine + Flowers = JOY" demonstrate Heather's positive and joyful outlook on life--joie de vivre. This joy is expecially evident with her new series, "The Joyful Garden" debuting for Artist of the Month for April at Artisans on Fifth.

In 2010, "All Pinned In,  Stressed Out, & Letting Go" was featured in an exhibit, "Quilts of the Coastal South," at the National Quilt Museum in Paducah, KY.  The exhibit highlights work of quiltmakers from Alabama, Florida, Georgia, Louisanna, and Mississippi who are the mainstream of quiltmaking today.  Heather's quilt was one of 18-30 quilts chosen for this exhibit and represented the state of Florida.

Today Heather is grateful for each day and enjoys being mother to two and "Nana" to five grandchildren. She hosts a monthly Art Quilt/Fiber Art Group at Sew-Mini Things quilt shop in Mt Dora.  Heather is the founder of Artisan's on Fifth(Artisan's Co-op) and chair of Bra-Vo 2013&14, an art bra fundraiser for breast cancer. She is also a member of Mount Dora Center for the Arts,  Women's Council of Fine Arts Mount Dora, Lake County Quilter's Guild, National Quilters Association, Museum of American Quilters Society, American Quilter's Society and is a Prayer Shawl Ministry member and chair of ConKerr Cancer-MOPS(pillowcases for ill children).